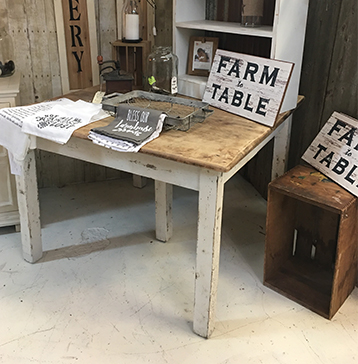 Unique goods that add character and charm to lives are fun to find here.

More and more people are taking up the hobby of “picking”—looking for unique goods that add character and charm to our lives. Antique shops and thrift shops are generally the best places to search for these finds because we pickers love looking for vintage pieces that have a story to tell. If you enjoy searching for one of a kind goods then you’re going to love the picking options in Cape Girardeau!

Downtown Cape Girardeau alone has over 10 antique shops and even more shops that sell antiques as part of their business. Some even refer to it as an antique district due to the large number of shops within walking distance of each other.

Annie Laurie’s tops the list for many area pickers, and has been named the #1 Antique Shop in Cape Girardeau for 11 consecutive years. You’ll find great prices, funky pieces and an eclectic/free-spirit vibe throughout this popular shop on Broadway. I’ve picked up furniture, vinyl records, new and vintage clothes, vintage fabric bolts and plenty of interesting home accessories within the walls of Annie Laurie’s.

Another popular antique shop, Spanish Street Mercantile, is what I like to refer to as the perfect place for “man-tiquing.” Don’t get me wrong, I’ve found plenty of things that I love there too (including several milk glass vases for my wedding), but this place is a man’s dream—you’ll find antique tools and industrial pieces for days! It’s also a great place to find architectural salvage. When you stop in, make sure to pop into their ice cream shop that’s connected. They make their ice cream onsite using an antique ice cream maker!

If you’re looking for variety, Pastimes Antiques and Brick Street Gallery are great places to check out. Both are filled with booths that are all stocked by different individuals renting the spaces. Somewhere in Time Antiques is my favorite place to go for vintage jewelry, although Pastimes has a nice selection of estate and costume jewelry as well. Back Porch Antiques and Riverfront Antique Mall have the best selection of vintage glassware. Riverfront Antique Mall is one of my husband’s favorite places to browse; he recently found an old wooden icebox there that he plans to use in his future speakeasy-themed bar. If you’re looking for whimsy, Judith’s Antiques is the place to go. Judith has the most creative window displays and has antiques upon antiques in her large space.

There are so many places to go and “pick” here, so I’ve provided a list of downtown and local shops worth checking out below.

You can also find great items at local thrift shops. I personally love going to the Teen Challenge Thrift Shop in Cape to look for thrifted furniture, and Goodwill and the Safe House for Women Thrift Store are great places to look in Cape as well. It’s worth mentioning that the Goodwill in Sikeston, which is only a 30 minute drive south, is widely known as one of the best places to thrift for clothes as well. 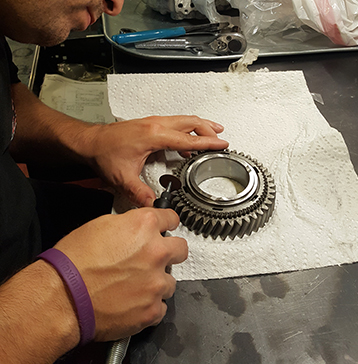 Makers of Cape and The DIY Culture Here

Making something with our own two hands is a source of pride for the people of Cape Girardeau.

Making something is a badge of honor in Cape Girardeau. There’s something about being able to say “Oh, I made that!” that people in this area love and respect. Laboring over a craft with our own two hands and showing that we can make things we need and want will always be a source of pride for the people here. Allow us to introduce you to a few of these local makers below.

Stacy is a sewist. She’s been sewing since she was 5 or 6 and says that her mom and both grandmas all sewed and were huge influences on her getting into the craft. She inherited her Meemaw’s sewing machine and started sewing on her own in 2009 for her wedding (looking for a way to make her bridesmaids unique gifts). She’s sewn all kinds of things and just recently got into the trade of sewing apparel, with which she is totally “smitten.”

“The ability to take a piece of fabric and create something wearable is so empowering,” she explains. A couple of pieces that she’s most proud of include a half circle skirt (she drafted the pattern on her own and used vintage fabric from a local estate sale), a raglan sweatshirt from Sew U Home Stretch (she stuck with the pattern but did modifications to make it work for her), a Gryffindor Quidditch robe for her son’s Halloween costume and a jacket she made for her son out of a pillowcase and vintage fabric. From these projects, she learned and perfected skills like hand lapping a zipper, creating a gold bias binding hem and making her first ever buttonholes.

If you’re itching to give sewing a try, Stacy suggests starting simple and allowing yourself to make mistakes. “There’s not a lot you can’t fix with a seam ripper. Every mistake you make you’ll learn from!”

Meet Pat Watson, the talented furniture maker. Pat started his craft almost 10 years ago while looking for a way to furnish he and his wife’s new home. He built a beautiful coffee table and two side tables out of pine and mahogany that he found in a dumpster. It wasn’t easy. He spent days removing the previous finish on the wood (borrowing a sander and then taking the wood out to his father-in-law’s barn to make the needed cuts with a mitre saw). He spent $12 on the project for hardware, stain and polyurethane. With that he was able to furnish his living room with what I would now call heirloom pieces that are still in his living room today.

Pat enjoys making furniture “because it can be very creative and personal.” There’s always multiple ways to build a piece, and Pat likes the creative and practical challenges that comes with the craft.

“I still love the tables I made nine years ago because they are a constant reminder that no matter where you are in life, you started with something and sometimes the first step is always the hardest and the most frustrating.”

Pat has made many pieces since those initial tables. He’s built furniture for friends, family members and admiring friends of friends who have seen his great craftsmanship first hand. He’s made tables, shelves, consoles, bar stools and much more. One of his more interesting projects was for a light beam at Dynamite Coffee. Owner, Robbie Britt, had a vision and Pat had a lot of fun bringing it to fruition.

Pat has some cool advice for those interested in trying this craft themselves. “I was a huge fan of Legos growing up. When designing something before building it-visualize it as nothing more than a series of Lego pieces you must build in order to construct your piece.”

Husband and wife Chris and Jen Behnken are both big DIYers. Chris, a computer programmer by day, loves working on cars. He can help fix just about anything that’s wrong with a car, and loves tinkering, building and mastering his 1995 Dodge Stealth RT Turbo. He also enjoys woodworking and perfecting his latest home brew. Jen, a conservationist by day, makes her own applesauce, cans tomatoes and salsa and landscapes their yard.

I asked Chris how he got into working on cars and found out it was a story of sheer will!

“When I was 15 and getting ready to get my learner’s permit, I needed a car and had been working on my dad’s farm since I was 13. My grandfather, who had passed away when I was 10, had an old 1974 GMC truck that was sitting around, and my brother, Joel, helped me get it working and safe to drive after sitting for 15 years without moving. I spent about 6-9 months working on it, and had it ready when I turned 16 to be my first car. Learned a lot about cars from Joel and owe a lot of my hands-on attitude and skills to him.”

We’re not just calling her the Seasoned Maker because of her ancho chili spice mix that she throws together for her favorite roasted veggies, but Carrie earns this title because she’s been a DIYer for a while now. She makes her own vanilla extract, kombucha, scented moisturizers with essential oils and the most versatile of all – baby wipes! She says they’re nice to have around for all kinds of things, baby messes aside. Carrie also helps keep her family and friends warm with her crocheting talent, making scarves, hats and blankets.

When asked why she likes to make so many things, Carrie explained that it’s a great creative outlet and she loves seeing a finished product after creating it. She also added that the woman in Proverbs 31 made things with her hands and that that scripture from the Bible is a big inspiration to her.

Katie, a digital marketer by day, is a big gardener, and, in the summertime, she grows a variety of vegetables and herbs. She germinates her own seeds during the winter, so when spring rolls around, she has her own starter plants to put in the ground. She likes to container garden the most but has also grown things in straight soil, too. She freezes a lot of the veggies that she grows, so she can enjoy them throughout winter.